To Debark in the Rainy Season

27/07/2014
Since March, almost every week my daughter (Menen) and I have walked to Debark and back to do the weekly shop and to visit the post office. It’s a twenty-mile (36 km) round trip and involves climbing from Dib Bahir (at 2,200 metres) to the top of the escarpment rim (3,000 metres).

In the dry season we used to take a donkey with us to carry the shopping home. But when the rains began in May, we stopped using the donkey, and just bought enough provisions to carry by hand ourselves. My husband (Asenake) now does the main shopping trip by public transport.

Last Wednesday (23 July) we walked with Habte, a student who is staying with us during the holidays.

I was up at 5 am because we intended to leave at 6 am, but what with one thing and another we didn’t get away until 7 am. The first hour was spent walking along the road to the bottom of the escarpment (that’s the Great Northern Escarpment of the Simien Mountains). 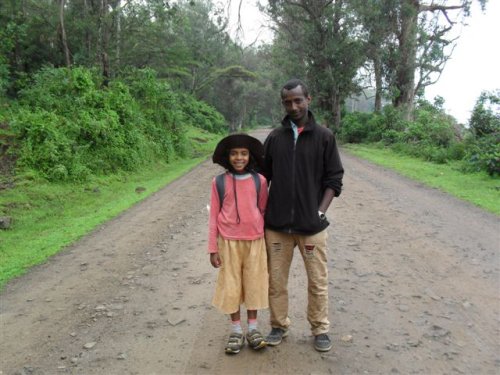 Low cloud kept the temperature cool, making walking very pleasant. After that first hour of road-walking, we began climbing the escarpment using footpaths, which were steep shortcuts, because the road winds here and there and, although it rises gently, it covers a much greater distance. 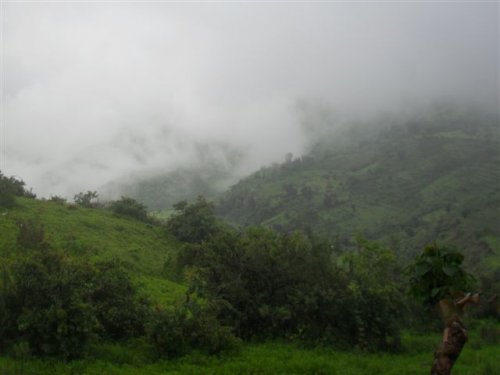 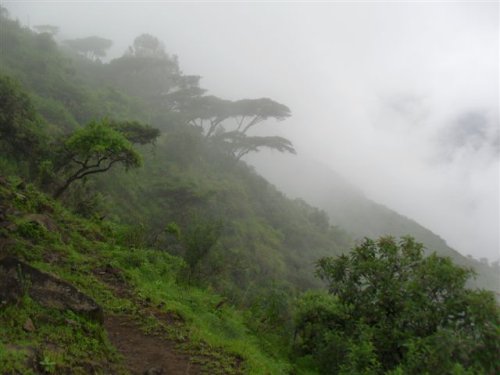 the footpath up the escarpment 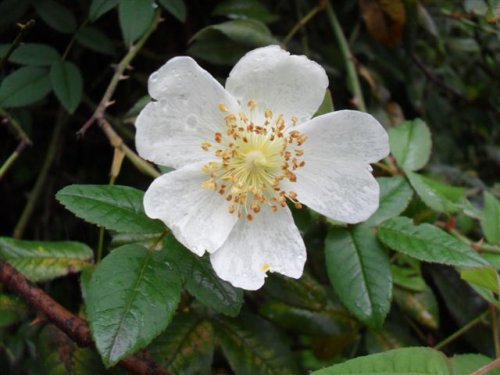 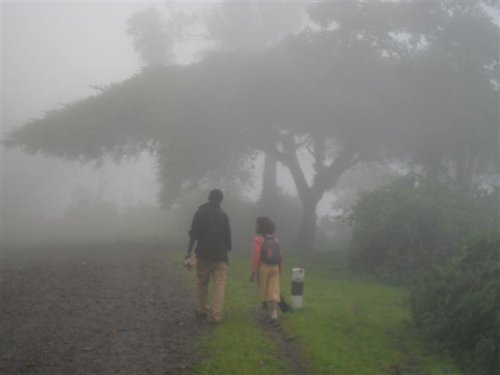 a stretch of level road called Awra Godana (8.30 am)

Later the cloud lifted and the temperature rose. To save time, we took shortcuts that involved fairly easy climbing of cliffs. Because of the damp conditions, we were extra careful on these steep bits. Eventually we reached Lema Limo, beneath the escarpment rim. 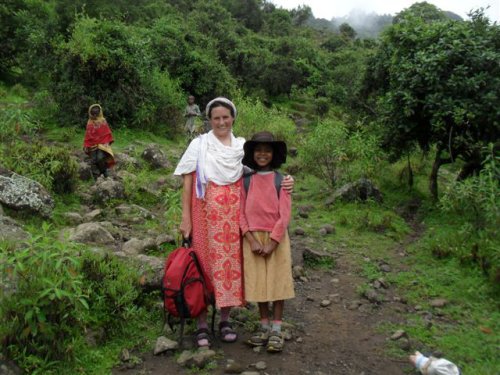 There Menen spotted some unusual beetles that I’d never seen before (and I have yet to identify them). The alkaline battery is for my camera. I do have rechargeable batteries but don’t use these on walking trips because of the risk of losing them. 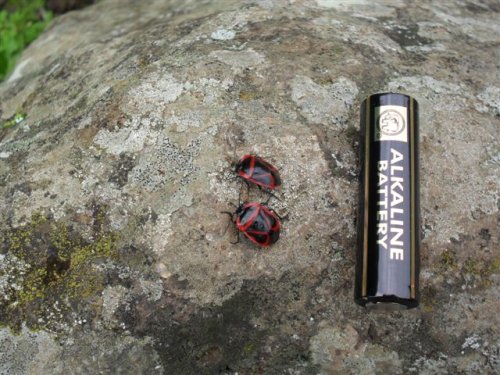 From the top of the escarpment, we looked west along the rim and saw thick cloud rolling in from the northern lowlands. It was very dramatic. 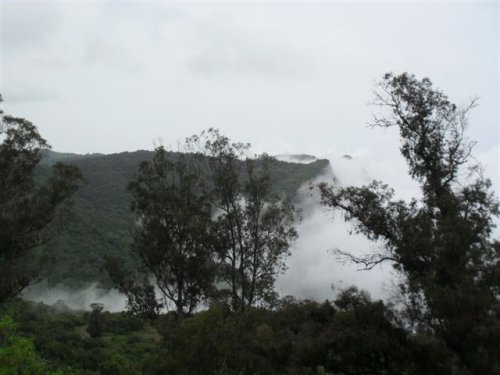 It takes an hour to walk down from the escarpment rim (3,000 metres) to Debark (2,900 metres). The new Chinese-built dual-carriageway in the town is now finished but is hardly used by vehicles. (In the late afternoon, I saw many local residents - some couples, but mainly groups of men - promenading along it.) 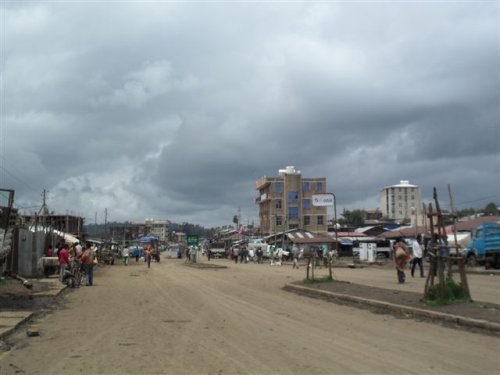 Ethiopians do not eat pork but recently pigs have been introduced to Debark to help keep the centre clean. They eat organic rubbish, including human and animal faeces. As the town has grown (the population is now over 40,000), the problem of human faeces has become great, there being a lack of toilets for residents and market-goers. The pigs have multiplied, so now there are about fifteen of them. They look very healthy and seem to cope well with the high-altitude cold and wet. 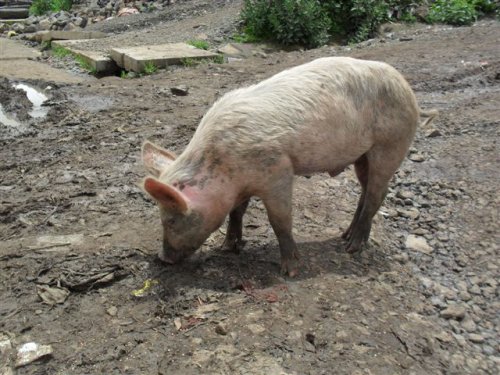 My sandal broke on the walk to Debark so I had to get it mended. A roadside cobbler did the job in ten minutes, using stitches and glue, for 6 birr (20p). (The cobbler declined to let me take his photograph.) We had lunch at a local restaurant, shopped in the market, and visited the post office and bank. It rained heavily at 4 pm.

Because we were too late to walk home (we must leave by 2.30 pm to ensure we are back before dark), we got a lift back to Dib Bahir in a lorry, which was a bumpy ride, but Menen thought it great fun. While I sat on a sack of potatoes, she and Habte hung on to ropes that crossed the back of the lorry. We were very lucky that it did not rain during our road journey.

We arrived home to find that there was a power cut. This being the rainy season, we are experiencing power cuts almost daily and are getting through a lot of candles. 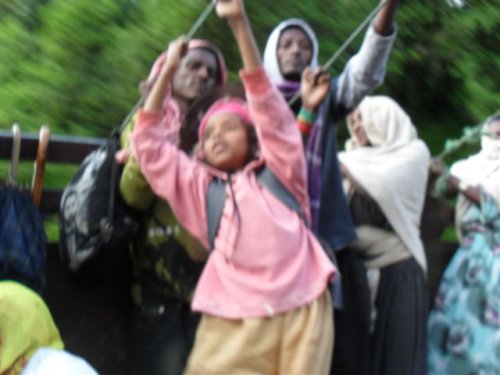 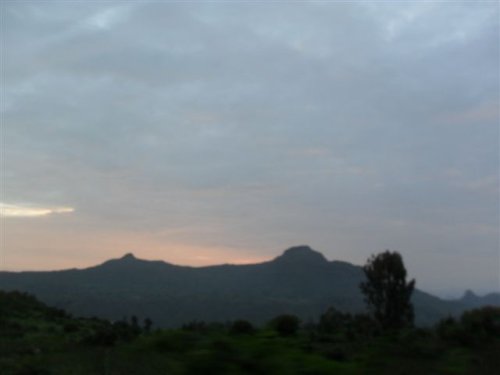 sunset (seen from the moving lorry near Dib Bahir)
Next
Previous