A Colobus Monkey in the Garden

25/05/2014
From time to time a lone Abyssinian black-and-white colobus monkey (Colobus guereza) visits our garden to feed on the leaves of the olive, wanza and bisana trees there. From its large size, I can see that it must be a male because the species is sexually dimorphic, with males weighing up to 13.5 kg and females weighing only up to 9 kg.

Colobus monkeys are high-canopy forest-dwellers and are normally seen in family groups comprising related females and their offspring and one territorial male. (The other males disperse.) The forests in the west of the Simien Mountains National Park reach up to the edge of Dib Bahir village and in the early morning we sometimes hear the territorial males’ low, resonant croaking with a rolling “rurr, rurr, rurr” call.

Leaves (and fruit, depending on the season) make up over 50% of colobus monkeys’ diet, but they also eat bark, wood, seeds, flowers, arthropods, and even soil.

Incidentally, the name colobus derives from the Greek kolobus meaning "mutilated", which refers to the colobus monkey’s lack of thumbs. However, colobus monkeys do in fact have small vestigial thumbs.

The Abyssinian black-and-white colobus monkey is also known as the mantled guereza (guereza is the Amharic name for this monkey).

My husband and our neighbours think it a very auspicious sign that this beautiful wild animal comes to us. It is likened to being visited by an angel! 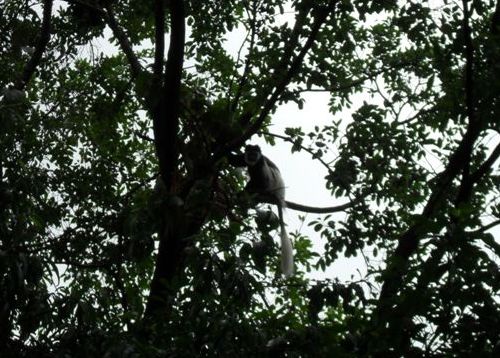 the handsome visitor in our garden
Next
Previous