16/05/2014
Here’s a handsome black-and-white spider that I haven’t been able to identify, although I wonder if it is perhaps a species of wolf spider.

The heavy rains have started early this year and spiders are moving indoors to get away from the wet. I found two spiders of the same species in a plastic bowl in our house. They were presumably trapped there overnight, not being able to scale the smooth sides of the bowl.

I went to fetch my camera. The larger spider must have been peckish because by the time I came back she had eaten the smaller one.

The surviving spider was about three centimetres (just over an inch) in length. 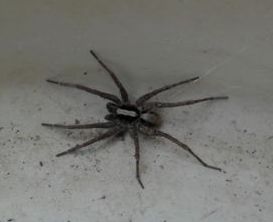 unidentified spider
What seems unusual about this spider is the greater size of the cephalothorax compared to the abdomen (usually the abdomen is the larger). Also, the fang-tipped jaws (chelicerae) are very pronounced.

After photographing her, I put this spider out in the garden to digest her lunch.

I am vegetarian and spiders are carnivorous. It is hard for me to like spiders (during my years in Ethiopia I’ve had quite a few painful spider bites), but I do find them fascinating. I don't like having spiders in the house, but in fact - apart from biting me from time to time - they do no damage and perform a useful service by eating noxious insects.
Next
Previous