13/11/2012
New Year's Day (for the current Ethiopian year of 2005) was on 11 September 2012, according to the Gregorian calendar. I had been working in Debark for ten days and was determined to get home in time for New Year. On 10 September I failed to find transport going to Dib Bahir, so I decided to walk.

It takes me four to five hours to walk the ten miles (18 km) from Debark (at an altitude of 2,900 m) home to Dib Bahir (altitude 2,200 m), depending on the weather and how much shopping I have to carry. The road winds down the escarpment, but there are several shortcuts for the walker.

On this occasion I had only my rucksack and two bags of important items, having left the heavy shopping in a storeroom at the Giant Lobelia Hotel, with instructions that it should follow by bus after New Year, when buses became available.

It's almost an hour's walk from Debark up to the top of the escarpment (altitude 3,000 metres). From there it's downhill all the way.

I was accompanied by a relative of my husband, Agegnew Alemu, who is a scout who works for the Simien Mountains National Park when he can. Agegnew was armed with a Kalashnikov in case of shifta (bandits) or hyenas.

Leaving Debark, we passed two women who had collected firewood in the forests on the escarpment and were carrying it to Debark to sell. 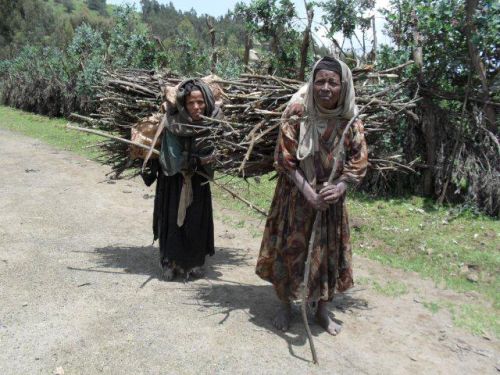 women bringing firewood to Debark
As we walked down the escarpment, sometimes Agegnew and I followed the old Italian road and at other times we took steep shortcuts. 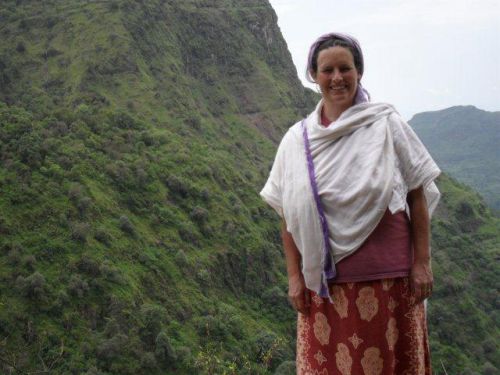 Kate below Wilkifit
On the road below a place called Wilkifit (named after the wilkiffa trees that grow there), we could see evidence of the landslides that had taken place during the rainy season. The road had been cleared by a bulldozer. 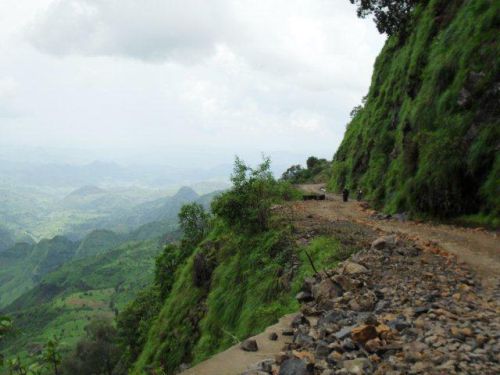 the escarpment road below Wilkifit
About half-way down, a storm swept up from the north. Although the worst of the rainy season was over, we were still experiencing heavy showers in the afternoons. (Indeed, unusually, these showers continued until early November this year.) 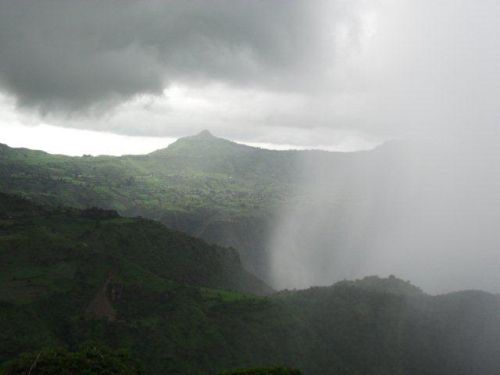 a storm sweeps up towards the escarpment
Along with three others who were on their way to Dib Bahir, Agegnew and I sheltered in a hut used by militiamen who guard the road. Fortunately, the rain missed us. Later the six men stood on a ridge and looked east to do a weather-check. There is no shelter between the militiamen's hut and Dib Bahir village, so those heading home wanted to be sure that they would reach Dib Bahir without being drenched by heavy rain. 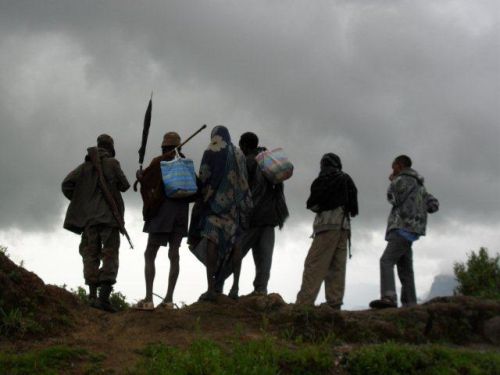 weather-watchers - six in a row
In the above image, Agegnew is second from the right. The two men with shopping bags over their shoulders have children at Empress Mentewab School; the young man standing furthest to the right has a little sister at the school too. The two remaining weather-watchers are militiamen.

It looked clear, so we all walked on. When we reached Dib Bahir, we found that it had rained heavily there.

On this occasion, the walk took Agegnew and me six hours because of the wait in the militiamen's hut. Afterwards, Agegnew walked back to his home at the top of the escarpment so that he could enjoy New Year with his family.
Next
Previous