12/11/2012
I was in Debark the day of Prime Minister Meles Zenawi's funeral on Sunday, 2 September 2012. It was an all-day event in Addis Ababa, covered by Ethiopian TV. Guests at the Giant Lobelia Hotel were able to see it on television in the hotel's foyer. Over breakfast, I watched the procession leaving Emperor Menelik's old palace and passing down the hill towards Meskel Square. Having much work to do, I had to return to my room, but I followed the ceremony all day because I could hear the foyer television from where I worked on the first floor.

Most people in Ethiopia do not have access to television. Indeed, on a recent Saturday my husband, Asenake, invited some elderly and middle-aged neighbours to visit Empress Mentewab School to watch his favourite Ethiopian Orthodox Christian DVD. It was the first time any of them had seen television. Afterwards they said that it must be a "good life" to sit and watch television.

With so few televisions in Debark, the authorities organised a procession to pass through the town so that all the inhabitants could participate in marking the funeral. From my hotel room, I watched as the procession lined up to the south and passed northwards right under my balcony. People carried the flags of Ethiopia and the Amhara State, as well as pictures of Meles. 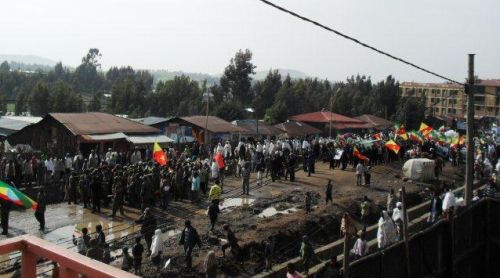 lining up for the procession 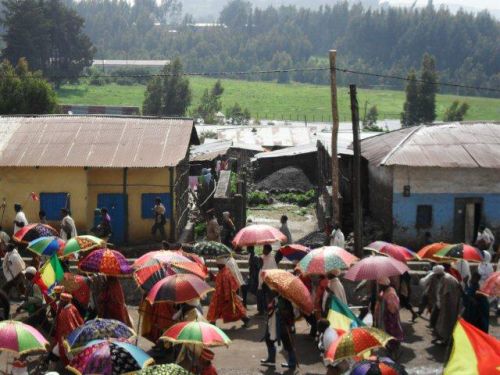 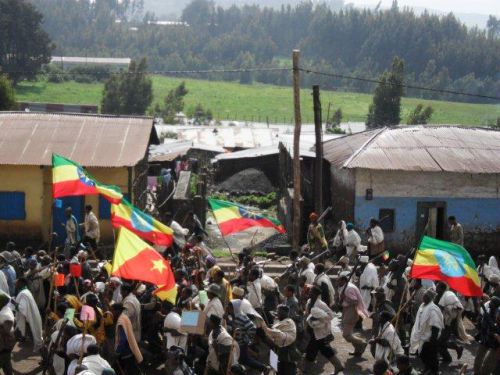 the people of Debark
Meles Zenawi died in a Belgian hospital on 20 August. Although the cause of his death has not been made public, everyone here says it was "brain cancer".

Unfortunately, my one source of news about current affairs, the Ethiopian weekly English-language newspaper Fortune, stopped being sold in Gondar in late September, for some reason. And so, my friend, Marta, is no longer able to buy it and forward it to me in Dib Bahir. (There are no newspapers available in Debark or Dib Bahir, and in Dib Bahir we cannot receive Ethiopian TV.) So now I have to rely on the Internet for news, which I can only access when I am in Debark, once a month.
Next
Previous