For eight years Kate Fereday Eshete lived in a small mud hut on the edge of Gonder city with her Ethiopian husband (Asenake Eshete), their children (Tom and Menen) and their menagerie. In 2010 Kate and her family moved to a bigger mud hut in Dib Bahir, a remote village in Debark Woreda (county).

Born in Cheshire - a county in the north-west of England - in 1961, Catherine (Kate for short) is the elder of identical twin sisters. In 1966 her family moved to Scotland, spending one year near Inverness before settling in the Orkney Islands, off the northern Scottish coast. Kate attended Kirkwall Grammar School. At 17 she left Orkney to travel.

In 1988, five years after having trained as a secretary, Kate was Senior Personal Secretary to the Director of Computing at British Telecommunications plc, working at BT Centre in the City of London. Kate relocated to the maritime city of Plymouth in the south-west of England in 1990 and worked in Marketing as a Projects Controller for a German telecommunications company.

In 1994 Kate made her first visit to Ethiopia to help street children. Five years later she walked 500 miles from Addis Ababa to Gonder via Lalibela with a donkey she called Dinkenesh, celebrating the Millennium near the remote Tekeze River in an area where no white person had ever been before.

In early 2005 Kate opened the Tara Centre in Gonder and ran it for five years. The Tara Centre was a community centre and a base for integrated projects to help people, animals and the environment. For more information about the Tara Centre, see ARCHIVES.

In 2007, Kate set up a small school at the Tara Centre, moving it to Dib Bahir in 2010. She and her family continue to run Empress Mentewab School as a non-profit social enterprise to benefit their community.

Ethiopians have just one name and use their father’s name as a second name. For a third name, they use their paternal grandfather’s name (for example, Asenake Eshete Tefera). They do not have family surnames and women do not change their names after marriage.

When Asenake and Kate married, Kate added her husband's second name to the end of her name to give herself the customary three names. However, outside Ethiopia she uses 'Fereday Eshete' as an unhyphenated surname (ie, she is Mrs Fereday Eshete). In Ethiopia Kate is known as Katy or Katy-ay (the suffix denoting affection in Amharic) or Katy-shoo (the suffix denoting affection in Oromigna).

Asenake was born on a farm in Debark Woreda in 1956. When he was 17, he joined the army and fought as a Commando during the 17-year civil war (1974-91) - he still has the scars from bullet and shrapnel wounds. He has thousands of relatives in Debark Woreda and other areas, families in the past having been so large. 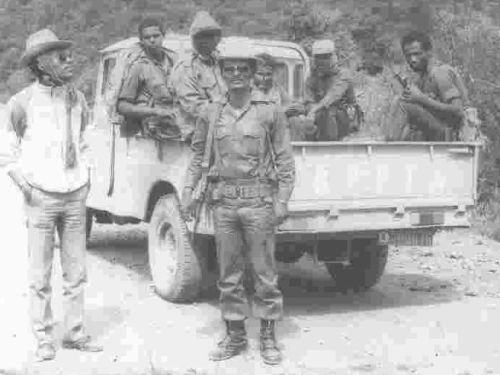 Asenake in the army (standing, centre)
Next
Previous