Previous
Next
For the 2012-13 academic year, Kate is the only teacher, assisted by her husband, Asenake, and one teacher who will, from December 2012, come from Dib Bahir Primary School to teach Amharic three times a week at Empress Mentewab School. Kate hopes to be in a position to recruit additional teaching staff later, but this depends on sufficient funding being secured to cover salaries. (The salary for a teacher is about 24,000 birr annually - that's £850, 1,050 euros or US$1,350.)

The school is open Monday to Friday (except on public holidays) at the following times:

Whereas the Primary Grade 1 class attends school mornings and afternoons daily, the two Infants classes come two days a week, mornings only. The Infants 1 class attends school on Tuesday and Friday mornings; the Infants 2 class on Monday and Thursday mornings. The Playgroup comes on Wednesday mornings only. This is necessary because Kate is the only fulltime teacher at present: while she teaches the Grade 1s, Asenake supervises the Infants or Playgroup classes at play.

Because there is currently only one classroom, the Infants or Playgroup classes watch children's programmes on the 21-inch television while the Grade 1s are doing gymnastics and outdoor play first thing in the morning. When the Grades 1s are ready to come into the classroom, the younger children move outside to play. 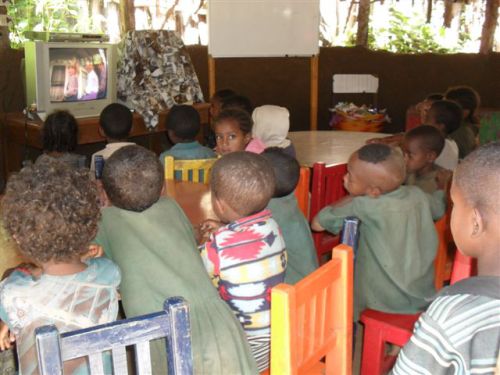 In the mornings the Grade 1 children do lessons and activities; in the afternoons they watch children's programmes and films on television. (Kate uses the afternoons to do administration and to prepare lessons for the next day.)

- wash hands and do English routine to dry hands (see below)

Other activities include playing with balloons, relay races, organised games, quizzes, and discussions on various topics, including hygiene, good manners, animal welfare, and looking after the environment.

The school follows the National Curriculum with additional activities to broaden pupils’ learning, including after-school clubs and - when funds are available to pay for these - outings to work-places, national parks, and historically important sites. Kate has started teaching basic French to the some of the more able pupils in Grade 1. 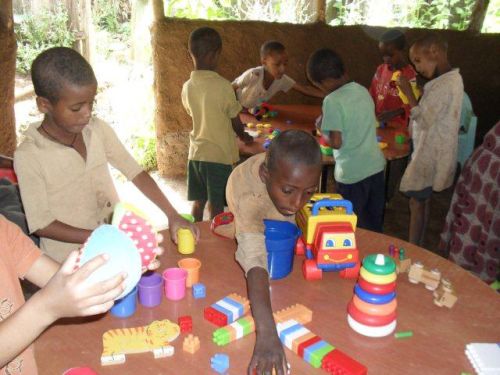 The emphasis is on learning through play.

For example, a task such as drying hands after washing is an opportunity the children to learn and practise English. The children do a short routine, using sun and air instead of towels (which is not only hygienic but saves on laundry):

By the time the children have each had a turn at leading their classmates through the routine, their hands are dry. 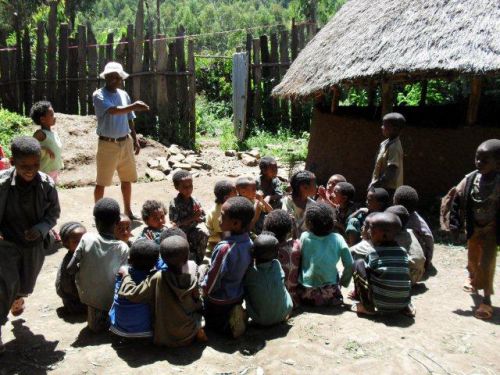 If you would like to help the school by paying towards a teacher's salary or an educational school outing for the children or by sending toys, books, jigsaw puzzles or DVDs, please see key [170414] doesn't existGIVE.
Next
Previous